This past weekend I participated in the Brockport Arts Festival! It was my third year being a vendor at this show.

I didn’t know how to mentally prepare for the festival this year, partly because I haven’t really worked on my art business lately, but mostly because I was so uncertain about how it was going to go because this show was going to be so different: I wasn’t bringing my jewelry, which is hands down my top seller. Instead, I was bringing only originals and prints. I’ve only ever sold a few prints at any festival, even the two day ones. I was taking a big risk, and with this being one of the more expensive shows that I do, I was really nervous that it was going to be a big flop.

END_OF_DOCUMENT_TOKEN_TO_BE_REPLACED

It’s Day 10 already! The challenge is two-fifths completed, and while part of me is exhausted by it already, I’m finding it hard to believe I’m almost at the halfway point.

Today was a rough drawing day. I couldn’t figure out what to draw; I was completely uninspired by everything on my list. Once I finally chose the subject for the day, I couldn’t choose which resource image to use! I couldn’t concentrate on drawing, and between babysitting all day and then having exhausted kids on a Friday afternoon, it was just a long day and I didn’t want to work. However, it’s 8:30, the drawing was just finished, and all of our plans for tomorrow were rescheduled so we’re able to get some much needed sleep in the morning, yay!

Inspired/nominated by: A skunk is not something I would have ever thought about doing, but this piece has a special place in my heart due to the circumstances in which it was nominated. My first year at the Brockport Arts Festival, I had a woman and man quickly walk past my booth, pausing just long enough to ask if I had any skunk pieces. I replied no, and they left as quickly as they had arrived. Now, I have never ever been asked for skunk pieces, and to me, it’s not a typical request. I figured it was just them quickly going through the festival for something specific (like the food), and were just being silly. But that was actually not the case! They showed up again last year, but stopped outside my booth instead of running past. She asked for skunks, I laughed, said that while I didn’t have any, I remembered the request from last year. They came in, we chatted (they were surprised I remembered them), and they fell in love with my drawings. Apparently she has the nickname Skunk and collects them, so the request for skunks was a genuine request. She asked if I would be back next year, and that if I was, would I have a drawing or print of a skunk, and maybe even notecards with them on it. I told her that I would have things ready, and she promised to come back and make a purchase. And that’s how the skunk came to be on my list this year!

Favorite parts: Skunk whiskers! Cute baby skunk paws! All the skunk cuteness! Also the background; I’m working really really hard this year on making my backgrounds interesting. I just gave the smallest hint that there was grass behind the skunk’s log, and I don’t know, but I feel like it really helped the piece as a whole. 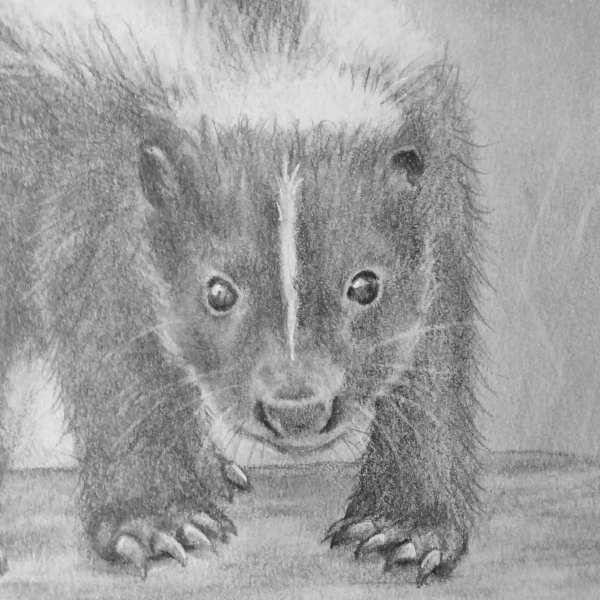 Complicated parts: I thought this piece would be easy after doing the sloth yesterday. but no. The fur was either black or white, no real inbetween. To add dimension to the black, I had to erase, but trying to get enough dimension without it looking white was hard, and then adding some dimension to the white without it turning muddy looking was hard. I spent as much time doing the hair as I did everything else in the drawing combined! 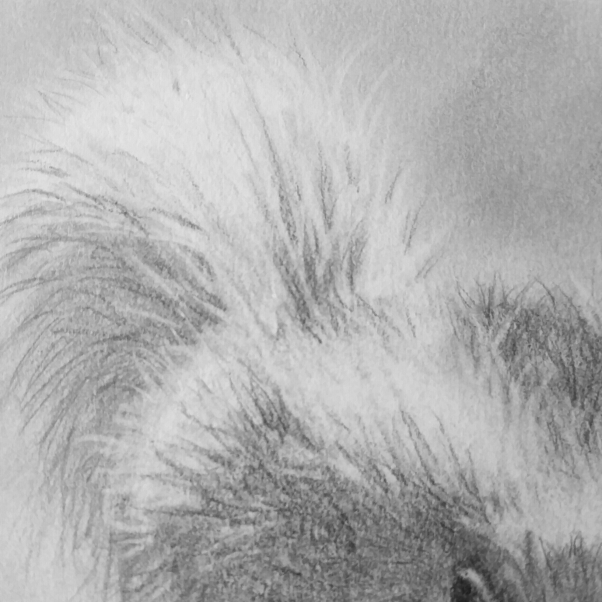 Other thoughts: As I was working on the skunk, I was wanting to turn him into a badger. I don’t necessarily have a thing for badgers, but they are the mascot for my Hogwarts house, the Hufflepuffs! So it got me thinking about doing a realistic picture of each animal for the Hogwarts houses and selling them as prints individually or as sets. I’m trying to break away from things like that, but at the same time, I think it would be awesome to have a set of drawings in my future movie room with the lion, badger, snake and eagle/raven as a subtle yet geeky way to decorate the space. Thoughts?

Product availability: The original is available for purchase in my Etsy store here, and prints will be coming. Notecards available by special request.

Skunks: yay or nay? I say yay for cuteness, nay for the stinkiness!

To read about my experience on Day 1, click here.

Sunday morning was stressful. I hadn’t slept much the night before, and I was battling a headache. As I got to Brockport, I drove through campus slowly and just reminisced.

END_OF_DOCUMENT_TOKEN_TO_BE_REPLACED

Oh Brockport, how I have missed you.

While this is my first time participating in this festival, Brockport was my home for four years while I was in college. It is where I met and fell in love with my husband, fell back into love with art, and where two of my three kids have been born. A lot has changed in the ten years since we’ve graduated, but I still feel at home there.

Day 1 of the festival was Saturday. Our original plan was to set up the booth and tables Friday night and do a picnic dinner on the college campus, allowing us to give the kids a tour of where Pete and I met, had classes, and hung out. However, I was going to be in the business district, so set up didn’t start until 6 am Saturday. The kids ended up staying the night at their grandparents, Pete and I got up around 4:30, and we were at my spot setting up a little after 6. When the festival is 10am to 6pm, that makes for a loooong day.

I have soooooo many stories to share, so I had to break it up into a blog post for each day of the festival.