Almost three weeks ago I participated in the Gaslight Holiday Celebration for the third time. This is such a special show for me: it’s right here where we live, our local library puts it on (and as I’m on the board, I get to help plan and prepare), and it marks the anniversary of my first show.

As much as I love this show (it’s my favorite one I do!), I was feeling a little let down at the end of the day. Part of that could have been that it was a very rough morning even before getting to the show, but it just felt different this year. I thought crowds were down (but I’m one of the only people who felt that way, so who knows?), and out of the three years I’ve participated, this was the lowest sales I’d ever had.

However, there were a lot of wonderful stories, and a lot of things were different after this show:

I had one gentlemen come to my space to check it out, and fell in love with The Last Homely House. He was finding faces in the mountain, and just wanted to know what all I had put in the picture that was hidden. After I told him I hadn’t intentionally hid anything, that it was based on a Hobbit/Lord of the Rings location, he laughed, said that didn’t interest him, but he just had to have the print anyway because it intrigued him! He ended up coming back later to talk about commissions. 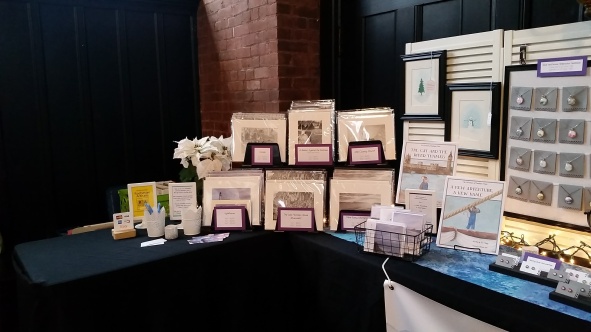 I had a sweet older woman come to my booth and fell in love with my Ravenclaw necklace. She asked what kind of chain it was, and when I showed her the clasp, she was really sad because she can’t use that style due to her arthritis. I mentioned my longer chains, and how they can slip right over my head, maybe they’d work for her too. She brightened right up, picked out a pendant, and once I put a longer chain on it for her, it slipped right over her head! She apparently only has one necklace that she wears due to the chain being easy for her to manipulate, and she was so excited to now have another necklace as well to wear!

One customer and her husband fell in love with my Lighthouse print, but want it larger. So the following Monday I did some research, ordered some larger print paper, and will soon have prints in a larger size of 11×14! I’ll keep you all updated on when those will release.

A repeat customer was telling me how she had bought my Reindeer cards last year, but hates sending them out because she thinks they’re so cute and hates to let go of them. She bought Nativity cards this year, and says she may have the same problem as she does with the other ones!

Customers totally making my day by thanking me for coming back again this year or asking me what my day job was because I should quit it and pursue this full time. When I’d say this is my day job, they’d get really excited and tell me that’s a good thing! It just helps reinforce to me that being an artist can be a “real” job.

When I look back on shows and festivals I participate in, most (if not all) of the items I sell are the jewelry. That’s fine, but sometimes I get depressed that my art doesn’t sell. It was really encouraging to see that almost half of the items I sold were actually prints, note cards, or Boathouse books! 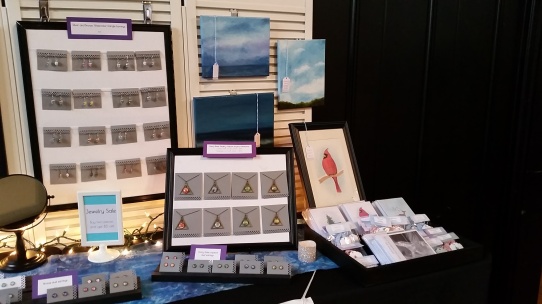 Another unusual aspect of this show is that some of my customers have placed additional orders since the show ended. I don’t think that’s really happened before and is really really encouraging to me.

Things I did differently at this show:

I started to release my new branding! I now have a banner, and I’m changing up my color scheme to a be brighter and more spunky in nature. It’s super fun and I’m loving it.

I raised up my slatted display boards. When I use these, I have to put my tables lower so I can actually hang things on the boards. Then people have to bend down, and it’s killer on my back to have the tables be so low. I put boxes under the boards this time, allowing me to have my tables up higher and more display space on the boards, and it worked out beautifully!

More (and better) price signs. I thought before I had the signs visible enough for customers, but I would still get asked often how much things were. I changed them up, made more of them, and I was asked about prices a lot less. The only issue I had was that I forgot to make up a price tag for my gift tags (oops!), so I had to hand write one and tape it to the container…*sigh*…

So that wraps up this year’s festival season! It was a great year, I learned a lot, and am looking forward to what 2017 has to offer! Did you attend any art & craft festivals this year?